Last night I saw James Bay in Bristol and WOW! He was incredible! He is one of those people who just manages to captivate your heart by writing and performing songs so well that they pull at your heart strings.  He would get lost within his music on the stage which was so engaging because I could see his passion for music oozing from him.

He is an acoustic god!

He is honestly one of the best people I have ever seen because of his interaction with the audience and the fact he cares so much about music. Ahhh he was just incredible.

I met James Bay! Me…AHHH. He was such a nice person, after the concert a few of us waited for him and he came out and spoke to us for ages. One thing that I really appreciated was the fact that he took his time with every person and his manger just stood next to him smiling and chatting, which was refreshing to witness. 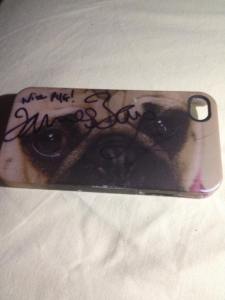 He signed my phone case as well!! I love that he wrote ‘Nice Pug’ on it.  When I went up to him, I was like ‘please can you sign my pug?’ haha imagine if I whacked out a real pug instead of my phone case.  Another aspect of the night that made it spectacular was that he was joking around with everyone and inspiring people to be themselves and embrace every moment. 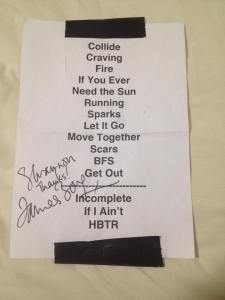 Not only did my friend Hannah and I stand right at the front but she also managed to get one of the set list and when James Bay saw it he was like ‘Did you ask the magic question- please can I have a set list?’  and then he asked my name and addressed it directly to me, which made me feel super special.