My book review for #AMightyDawn by Theodore Brun. 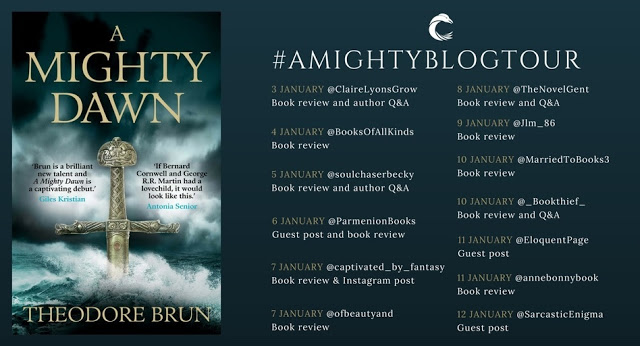 A gripping and brilliantly realised debut epic adventure set in eighth-century Denmark. This is the beginning of an ambitious new series in the vein of George R.R. Martin’s A Game of Thrones.

Hakan, son of Haldan, chosen son of the Lord of the Northern Jutes, swears loyalty to his father in fire, in iron, and in blood. But there are always shadows that roam. When a terrible tragedy befalls Hakan’s household he is forced to leave his world behind. He must seek to pledge his sword to a new king. Nameless and alone, he embarks on a journey to escape the bonds of his past and fulfil his destiny as a great warrior.

Whispers of sinister forces in the North pull Hakan onwards to a kingdom plagued by mysterious and gruesome deaths. But does he have the strength to do battle with such dark foes? Or is death the only sane thing to seek in this world of blood and broken oaths?

My Review of A Mighty Dawn

*I was luckily sent this book in exchange for an honest review, thank you so much to Kate asking me to participate.*

I do not normally read this genre, or when I do it centres around Tudor England but I thoroughly enjoyed it and am now eager for more.

I found this book to be riveting, captivating and not predicable in the slightest, which I loved. This is the first book that I have read about Eighth-Century Scandinavia which was both informative and educational.  I also have not read a lot about the Vikings, so I eagerly delved into the book with no preconceived ideas.

This is the first book in what I hope will be a brilliant historical fiction series which I will definitely pick up in the future. *EX-CIT-ING…GIVE ME MORE NOW!*

Within A Mighty Dawn, Brun effortlessly creates a complex world full of intriguing, well put together and compelling characters that will suck you in. While reading this novel, I was fully immersed within the world and at the mercy of Brun cleverly crafted narrative.

Another part of A Might Dawn that I thoroughly enjoyed was the construction of the narrative. The novel is split in three parts, with each section showing a different side to Hakan aka Erlan (the protagonist). At the beginning of the novel, Hakan is the chosen son, then he goes on a journey of self discovery and finally we (the reader) see him under the ruling of a new king.

After tragedy strikes Hakan’s life, he abandons his old identity and instead takes on the new identity of Erlan. This journey of discovery is one that can be felt by all readers and the tragedy element makes it a page turning extravaganza.

I do not want to give away any of the book but if you are a reader of historical fiction or fantasy, go check out this wonderful book. This book deserves all its recognition and much much more. 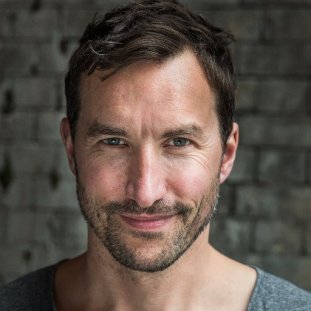 Theo is an established author and public speaker. At Cambridge, he studied Dark Age archaeology (amongst other things), graduating with a BA in Archaeology and Anthropology and an MPhil in History. After university he trained as a solicitor, qualifying into the area of arbitration law where he worked for several years, including for two Magic Circle firms. His career took him first to London, then to Moscow, Paris and finally Hong Kong.
​
However, in 2010, disenchanted with the law and with the germ of an idea for a series of novels already in his head, he quit his job in Hong Kong, jumped on a bicycle and pedalled 10,685 miles across Asia and Europe to his home in Norfolk. At this point he sat down in a spider-infested cottage to write the first volume in his epic historical fiction series, the Wanderer Chronicles. Four years later, A Mighty Dawn was published by Corvus Atlantic. Its sequel, A Sacred Storm, is due for release in July 2018.​
​
Theo is a third generation Viking immigrant, his Danish grandfather having settled in England in 1932. One could say Viking stories are in his blood. They did also form a small part of his degree, but the truth is they only came alive for him through the discovery of Wagner’s Ring Cycle when he was studying for his law exams. Through this unlikely portal, Theo discovered the hoard of stories from the old Scandinavian and Germanic worlds which underlie many of the works of authors like Tolkein, CS Lewis, George RR Martin, Neil Gaiman, Giles Kristian and Bernard Cornwell to name a few. It was this material that provided the inspiration for the first two novels in his Wanderer Chronicles series.
​
Besides writing, Theo is also an acclaimed speaker and has presented to a wide variety of audiences about his epic bike journey and about creative writing, as well as inspiring young people to dream big and pursue their passions.
​
Theo is married to Natasha. They live in London together with Natasha’s daughter, Ella, their baby girl, Talitha, and an unruly dog named Wilmo.